A little boy in a blue and white checked shirt, shorts and flip flops runs over to his mother who sits on a rickety bench in a beautiful, tree-filled garden, climbs into her lap and poses for a photograph in Kakata, Margibi County, Liberia. A year and a half ago, Benjamin, who lives with his grandmother, could hardly sit up. He was ill, and his grandmother, Ma J, took him to a local herbalist thinking he was “sick due to witchcraft”. According to Ma J, treatment by the herbalist did not seem to work, and Benjamin’s situation worsened. His face became puffy, and he had a distended abdomen and skin lesions on his legs and feet.

In September 2015, a general community health volunteer (gCHV) who is part of Liberia’s frontline health worker system, noticed Benjamin during a routine outreach visit to raise awareness and conduct screening for malnourished children. The gCHV immediately recognized that Benjamin was malnourished and suffering from generalized bilateral pitting edema. He immediately spoke to Ma J, explaining what Benjamin was suffering from, and referred him to the C.H. Rennie inpatient treatment facility for the management of severe acute malnutrition and related complications.

Benjamin showed signs of malnutrition, including thin hair, loss of appetite, a severely distended abdomen, unresponsiveness to the environment, fever, difficulty with respiration, and sick lesions. He was given sugar water, therapeutic milk and other medications in line with national protocols for treatment and based on the symptoms he displayed.

JUST 13 DAYS LATER, BENJAMIN’S APPETITE RETURNED, HIS EDEMA WAS HEALED, AND HE WAS DISCHARGED FROM THE INPATIENT CLINIC. 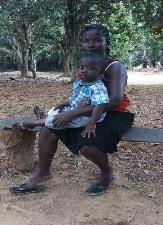 Just 13 days later, Benjamin’s appetite returned, his edema was healed, and he was discharged from the inpatient clinic and referred to an outpatient treatment site for continued treatment until he recovers fully.

UNICEF provides ready-to-use therapeutic food and anthropometric materials to health facilities for treatment of severely malnourished children. UNICEF also works with a non-governmental partner, International Medical Corps, to provide technical services to county health personnel in complying with national treatment standards to prevent the death of children and to reduce defaulters in the programme.

UNICEF is also supporting the implementation of a Ministry of Health programme that seeks to build the resilience of Liberia’s health system, improve the quality and use of basic health services and increase maternal, newborn and child survival by implementing a national community health assistant programme.

Benjamin with his mother at home in Kataka, Liberia (Photo: UNICEF/International Medical Corps)