It’s less than two weeks since we returned from the UN General Assembly in New York, and this year’s trip, whilst as hectic yet fruitful as any, was underlined by the global food and malnutrition crisis. All eyes were on leaders as we looked for ambitious action to tackle it.

Prior to the week, there was a sense of optimism in the air and buzz around the #HungryForAction campaign which we’re part of. A brilliant oped penned by Graça Machel and Mary Robinson laid down the aims of the campaign with clear policy asks for leaders during the event.

Despite lots of talks covering the crisis and new pledges made, it was sad to see not all governments step up. Particularly those with money and power.

The Americans led the way with multi-billion commitments and we watched Samantha Power of USAID (alongside CIFF and UNICEF) host an inspiring event that saw $280 million (beating the $250m target) in new money committed specifically to treating severely malnourished children by governments including the Irish and Dutch, and philanthropies such as CIFF, Gates, ELMA and CRI (read more at Devex). But the talk afterwards was dominated by the ‘no show’ of the British Government. Of course, it’s been a turbulent period in the UK with a new Prime Minister and cabinet, alongside the news of the Queen, but to give nothing to child malnutrition (on the same day as a zero UK commitment to the Global Fund replenishment) left us speechless. With presence and a speech at the event, we wait with bated breath for a financial commitment to back up the rhetoric, in the coming weeks.

In the background to these high-level events, myself and colleague Shelley Pigott (our new Interim Director of Strategic Engagement, who brings with her 20 years of fundraising experience) achieved our own objective of building even better relations through in-person time with many of our key stakeholders – a real treat after doing this for so long virtually.

The highlight of the week came at the end with an excellent initiative by Big Win Philanthropy & Gates, launching the Presidential Dialogue Group on Nutrition. “We can end stunting in Africa…this is a collective effort, we do it for the children, for our countries, for our future” said African Development Bank Group President, Akinwumi Ayodeji Adesina, in an inspirational speech. The event brought together presidents of DRC, Madagascar, Tanzania, Malawi, Senegal, Niger and Uganda, each championing nutrition at the highest levels. We were honoured to be one of three international organisations invited.

Whilst UNGA provided an opportunity to shine a light on the global malnutrition crisis, we sadly still feel the world is on course to repeat its usual course of action – not doing enough until it’s too late. We are potentially just weeks away from the first famine being declared in Somalia, with other countries soon to follow. We’ll keep pushing the #HungryforAction campaign alongside dozens of sector partners. We’ll also continue to engage the private sector, establishing new partnerships in support of our Appeal. Raising funding for nutrition is our reason for being – and it’s never felt more important. 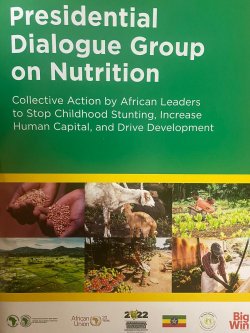 WHILST UNGA PROVIDED AN OPPORTUNITY TO SHINE A LIGHT ON THE GLOBAL MALNUTRITION CRISIS, WE SADLY STILL FEEL THE WORLD IS ON COURSE TO REPEAT ITS USUAL COURSE OF ACTION – NOT DOING ENOUGH UNTIL IT’S TOO LATE.