How to Feed the Future

How to Feed the Future

Holly Carter, Intern at The Power of Nutrition

Globally, one in every nine people experience hunger. Ending this pervasive issue, as per the second UN’s Sustainable Development Goal (SDG), is an immense challenge. With hunger on the rise again and millions of children still undernourished, despite progress, the world is at risk of not meeting the global goal to end hunger and halve the number of stunted children by 2030. To discuss potential solutions, on 26 September 2019, over 150 stakeholders in the agribusiness and food sectors convened at The Economist’s ‘Feeding the Future’ conference.

I attended the event with a number of colleagues who, like me, are interested in learning about emerging solutions from the private sector. The day began with experts outlining the scope of the challenge, stressing that no global region is exempt from hunger and malnutrition in its many myriad forms. The panel discussions covered a range of solutions that were being piloted or scaled by using technology, tackling food waste, introducing alternative proteins or testing new models of sustainable farming. 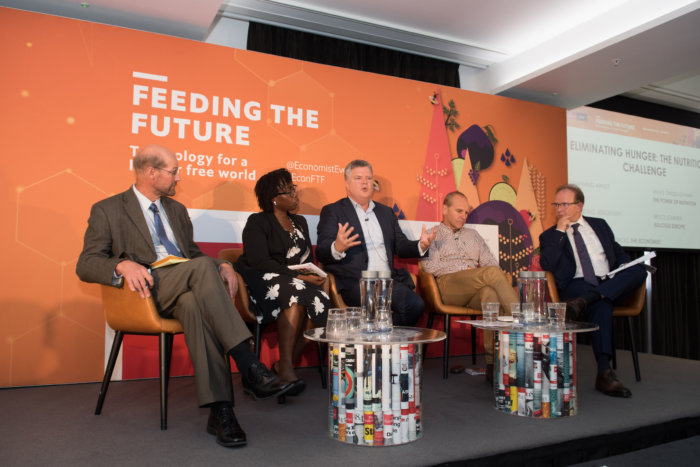 WITH HUNGER ON THE RISE AGAIN AND MILLIONS OF CHILDREN STILL UNDERNOURISHED.

The Power of Nutrition’s Director of Investments, Mavis Owusu-Gyamfi, was on a panel that discussed how initiatives to eliminate hunger should also aim to address the nutrition challenge.  She outlined the urgent need for private-public sector collaboration to fund programmes at scale to improve nutrition. SDG 2 on zero hunger is critical for achieving most of the other SDGs, but it will only be reached if partnerships, as in SDG 17, are successful.  However, when she did a sector check of the participants it became clear that the majority were from the private sector, with few representatives from government and civil society. Although it was encouraging to see high corporate engagement in the room, the lack of representation from other key stakeholders showcased the continued siloes in the sector. 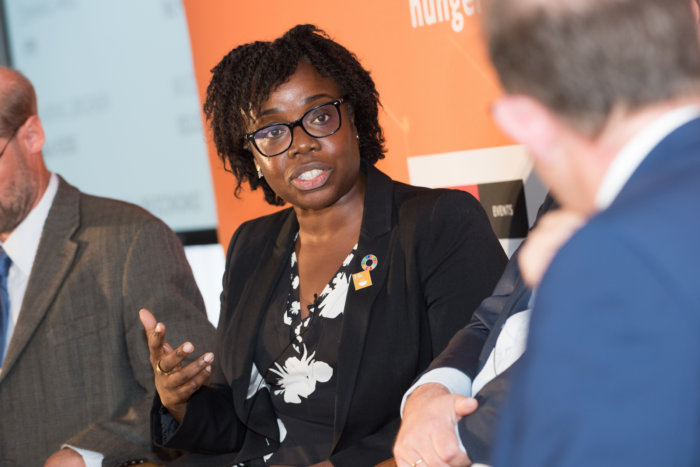 Reflecting on the full day’s discussions, there was plenty of scope for optimism, and I was encouraged by exciting examples of how we can feed the future. One example shared was ‘vertical farming’, where food is produced in stacked layers in controlled environments, resulting in net carbon emissions of zero. This practice, although not a reality in many areas of the world, is a game changer for over half of the world’s population residing in urban settings, using just 1/3000th of the water required compared to traditional farming, and cutting food wasted to 1%.

Food waste also emerged as a recurrent theme across most panels affecting all countries regardless of income. Whilst solutions were offered via predictive apps and promotion of community collaboration, it was clear that improved infrastructure and accessibility are pre-requisites, highlighting the necessity of government intervention. Furthermore, there were discussions on how the behaviours of individuals could help reduce food waste, with extensive debate on the role of individual choices (e.g. reducing the consumption of meat and procuring locally grown produce), versus the impact of a company’s production methods on climate change.

It was an interesting and thought-provoking day. My main takeaway is that the solution to future feeding sits at the intersection of business (agriculture, health, technology and other industries), governments and the international development community. This conference touched upon all these areas – an achievement in itself considering that two decades prior discussions of this nature remained relatively siloed. However, this is not enough, and if we are to ensure we can feed the future global population, in a nutritious and culturally contingent way, these discussions must move to action and solutions must be found through meaningful partnerships.

SOLUTION TO FUTURE FEEDING SITS AT THE INTERSECTION OF BUSINESS, GOVERNMENTS AND THE INTERNATIONAL DEVELOPMENT COMMUNITY.